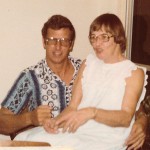 Charlotte Alice Vorfeld Fleener, 98, of Waimea died Saturday, Sept. 15, at Hale Anuenue Restorative Care Home in Hilo. Born in Kahuku, Oahu, she was a homemaker, and secretary at AMFAC. Survived by daughter, Joanne (David) Fleener Coon of Waimea; sons, Michael C. (Joan) Fleener of Stillwell, Kan., and John R. (Sharon) Fleener of Lincoln Park, Mich.; nine grandchildren, 18 great-grandchildren and nine great-great grandchildren; and brother, Robert (Wilma) Vorfeld of Kahului, Maui. Charlotte was my sister-in-law, and the picture above is reminiscent of when I first met her. She and her son, Mike Fleener, are posing for a picture at a family get-together. I first met her when she and I were secretaries at AMFAC, then later when I began dating her widowed brother, Jack Vorfeld. Not long after that, she became my sister-in-law. She was bright, energetic, and absolutely delightful. At the same time, she had a soft, gentle way about her. For many years until she passed away, she lived quietly, surrounded by family. I'd been to see her a number of times, and while she had some memory issues, she always recognized me. May God bless and comfort her wonderful children and their children. She left a remarkable legacy.
Tweet
This entry was posted in Family, Vorfeld and tagged Amfac, Bob Vorfeld, Charlotte Vorfeld Fleener, David Coon, Jack Vorfeld, Joan Fleener, Joanne Fleener Coon, John Fleener, mike Fleener, Sharon Fleener, Wilma Vorfeld. Bookmark the permalink.