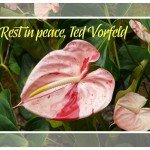 It is with deep sorrow that I announce the death yesterday, August 30, 2014, of my stepson, Ted Vorfeld. He was one of my best friends and heroes, and after his dad died, he was ever-thoughtful about my situation. Ted often collaborated with my brother, David Crook, and out of those times, blessed me again and again. Having a new garage built was a gift from Ted and Martha. Another was an iPad. I will be putting together some photos of my visits to Ted and Martha's home in Holualoa, Hawaii. In 2012 I took the picture of the anthurium on the property of their neighbors, Bobby and Alice. Alice raises beautiful flowers, and through the years, thanks to my many visits courtesy of Ted and Martha, I was able to capture much of the beauty of her creations. 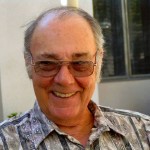 Ted had lived this past year with esophageal cancer, and he simply amazed the medical profession and family with his ability to stay active. Up until quite recently he took care of their property himself. He fought a strong battle, but also knew when it was time to stop fighting. He will always live in our hearts as an extremely kind, intelligent, savvy, generous, gracious, entertaining storyteller, who loved and enjoyed his family above all else. And, like his father, he was a superb cook! Here is the obituary from the Honolulu Star Advertiser. And just to make sure we include everyone on the blog: He is survived by his wife, Martha Vorfeld; daughter Jan Vorfeld and son-in-law Jim Finn of Mill Valley, CA; son Jeff Vorfeld and daughter-in-law Joanne Vorfeld of Albany, OR; step-son, Doug Luce, of Ruckersville, VA; niece Victoria Kukuruda of Homeland, CA; cousins Joanne and David Coon of Kamuela; cousins Robbie Vorfeld and family, and Walter Vorfeld and family, both of Maui; cousin Michael Fleener and family of Kansas City, MO; sister-in-law Esther Green of Waimanalo; aunt Wilma Vorfeld, Maui; stepmother Judy Vorfeld of Peoria, AZ; grandchildren Cameron Kurosu, Kirstin Kurosu, James Finn, Kate Finn, and Christina Vorfeld; and numerous extended family both in the Islands and on the mainland. Extended family includes cousin Patty Vorfeld, New Hampshire; Jason, July, and Jodi Green, Jennifer Green Taddai; Ted and Marilyn Cleghorn, Maui; step-sister Shannon Patrizio, Colorado; step-brother Ron Simpson, Washington; numerous Janssens, Olsons, Webbers, McDiarmids, Clarks, and many more.
Tweet
This entry was posted in Vorfeld. Bookmark the permalink.